Read what Vladimir Ashkenazy said about 'For Viktor'. Now available from Kindle.

It's taken a while -- I wanted to wait until the new cover was ready -- but For Viktor is now available from Kindle. 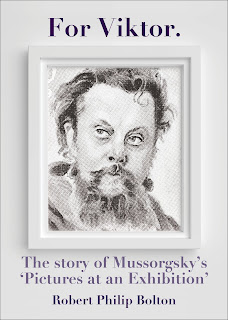 Maestro Ashkenazy is an acknowledged expert on Russian music. He has recorded Mussorgsky's Pictures at an Exhibition twice and has created his own orchestration of the suite which he has recorded with the Philharmonia Orchestra as well as conducting its performance with other orchestras all over the world.
Here's what he said about For Viktor.

What Vladimir Ashkenazy said about ‘For Viktor’

Dear Mr Bolton,
I read your book For Viktor. The Story of Mussorgsky's 'Pictures at an Exhibition' with great interest and satisfaction. I think it is very important to try to bring school children to a certain level of appreciation and understanding of what great music of the great composers brings to all of us. I know of numerous examples of how children react being exposed to well presented lessons based on this kind of music and the results are absolutely astounding; apart from the fact that as they grow up they almost never abandon their affection for the serious music, they perform much better in all other subjects of their curriculum than those children who were not exposed to the same musical appreciation program. I know first hand of these examples in many countries - from the U.K. to Russia - having been a part of such programs.
I think your very well presented book on 'Pictures' could be a wonderful item in such a curriculum and I think you should endeavour in presenting it to various educational institutions in your country. I'll be delighted to be of help when needed and send you all my best wishes.

Based on fact, and historically accurate, For Viktor is written in Modest Mussorgsky’s own voice as he guides a young companion around the picture exhibition held in honour of his friend Viktor Hartman at the Academy of Artists in Saint Petersburg, Russia, in 1874. It was this exhibition which inspired Mussorgsky to write the suite of music he called ‘Pictures at an Exhibition’.

The book is written to be read or delivered in time with the playing of the music. The duration of each section — including each of the promenades — is about the same as the musical piece it describes. Indeed, important events in the narrative often intersect with appropriate moments in the music to bring the unseen pictures to life.

It is indeed a unique meeting of art, music and literature.
at Tuesday, July 02, 2019

Robert Philip Bolton
I was born in Auckland, New Zealand, in 1945 which makes me much older than I ever thought I’d be. I began freelance writing in 1983 and have been a self-employed writer ever since. For the last few years have dedicated myself to my own writing, preferring to write and publish my own work which is mostly (but not only) about New Zealand and New Zealanders. I have published thirteen books which I sell in New Zealand from my website and around the world from Amazon (and Kindle) . Information on how to buy my books and e-books is provided on my website. I welcome comments and feedback and am happy to speak about my books to schools, book clubs and writing groups within a convenient reach of Auckland. I welcome email comments and feedback.