A new edition of 'Underneath the Arclight'

My popular New Zealand novel, Underneath the Arclight is a wonderful, funny New Zealand story with a cast of delightful Kiwi characters. As a result of stocks being almost depleted I have taken the opportunity to reissue the book with a new cover. The new  cover depicts a movie projector (The Arclight is an old movie theatre), the number 5 from a film leader countdown, and the mysterious silverbeet patch which is so central to the story. 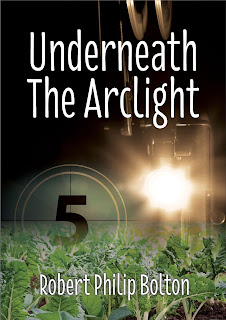 HERE'S THE BACK COVER BLURB FROM THE NEW EDITION OF UNDERNEATH THE ARCLIGHT:

Nothing much ever happens in Robinson Street, Blythewillow, and for Phyllis, Graham, Karen, Charlie Downs and Monkey Oldfield, and most of the other residents of the town, that's just the way they like it.

With The Arclight cinema, The Record Reign, Wake's butchers, the garden, and Monkey Oldfield's brand new chicken coop, the residents of Robinson Street have everything they need. So when Clint appears in the garden one night and tells Phyllis that it’s all about to change she doesn’t know what to think.

Within days there are changes at The Arclight, and Clint's isn't the only ghost making its presence felt. Long forgotten events from the past bring visitors from the outside world; from the city, Australia and from Los Angeles, with news, offers and veiled threats.

Are these the changes promised by Clint? And can the residents of Blythewillow save their town's bucolic charm?

Only time will tell as Karen and Graham and Jehoiada Hartsfield – the charming young city lawyer – peel back the layers of Blythewillow's forgotten history to discover Clint's secret treasure.