Another 5-star review from an Amazon reader. This time for 'My Marian Year'. 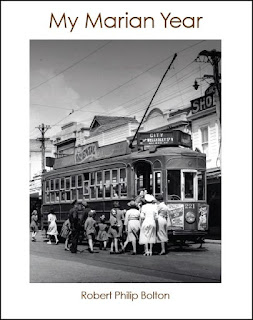 Just noticed that an Amazon reader has given a five-star review to My Marian Year. Read it here.

Email ThisBlogThis!Share to TwitterShare to FacebookShare to Pinterest
Labels: Amazon, My Marian Year 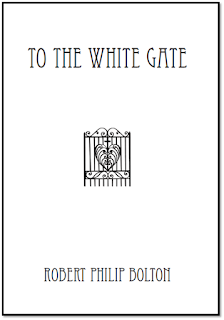 Two recent reviews on Amazon have given To The White Gate five stars. A wonderful achievement. That's three five-star reviews for this book.
The most recent (by 'Shake') on 6 August:
The White Gate, by Robert Philip Bolton, is a gorgeous, saga-like story of one man's grasp on life, growing up and living in Aotearoa (Maori for NEW ZEALAND). Unlike many books about this country which star the country itself, this rich and beautifully told story relies on its finely crafted dialogue and narrative to describe the characters and the locality to such an extent the reader does not want to leave that locality even for 'incidental' happenings such as WW2, so fine is the narrative.
Bolton describes himself as a life long writer. This he ably proves by writing simply and directly, the story of one man growing from childhood to old age, disappointment in love, going to war but having not a clue where or why, just going with the flow; finally, becoming a true fit for his learning, his feelings and his opinions.
But the novel does not meander. With page one the reader is in the safe hands of a master story teller who wastes no words on schmaltz or over-writing emotion. Instead Bolton convinces you of the truth of his writing by making his superbly formed characters achingly real. You want to keep turning the pages of the White Gate not just to see what is next, but because that is what the characters insist that you do. The dialogue and languageing are superb.
This book about Aotearoa, although written with a definite 'national' perspective, exists happily on the international stage of good writing, good characters and superb narrative. An excellent Book Club choice. Strongly recommended.
This one (by 'SusanKL') was posted on 9 June:
Beautifully written, emotionally evocative...lyrical and strong. Felt transported back to the time period; loved getting a taste of life back then, down under. Loved returning to the book every time I put it down; can't recommend it highly enough.
These come after the first (from 'MaxDance') on 6 January:
This is a great read!
This book takes the form of an elderly man’s recollections, starting with his early teenage years during the 1930s in Auckland, New Zealand.
With a beautiful and expansive public Park, described in exquisite detail, as the anchor or central hub the story gently unfolds through to the turn of the century. There are many observations of the changing nature of life in New Zealand during that period of time and, as an ancient New Zealander myself; I recognised many of them instantly.
Tommy leaves school to work in the Park plant nursery and grows into an intuitive man who is only really content when close to nature in his beloved park. Over the years he befriends a generous mix of flamboyant individuals who mostly have impressive artistic talents. He learns much from them (particularly from one mysterious wee fellow) and the development of knowledge and wisdom that sometimes comes with experience and advancing years is well portrayed.
And the ubiquitous White Gate plays its part with increasing regularity and clarity.Yes, a good well researched book with great attention to detail and many examples of human nature at play in the small group of islands known locally as Aotearoa.
Highly recommended.

Email ThisBlogThis!Share to TwitterShare to FacebookShare to Pinterest
Labels: Amazon, Reviews, To The White Gate 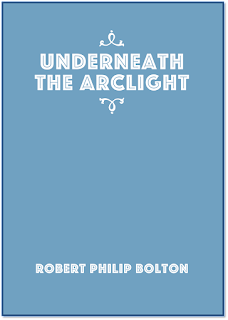 As a promotion I have made Underneath The Arclight available as a FREE download from Kindle here. Feel free to share this offer which will end on Saturday 8 August (NZT).
at Tuesday, August 04, 2015 No comments:

Email ThisBlogThis!Share to TwitterShare to FacebookShare to Pinterest
Labels: Kindle, Underneath the Arclight

On publishers and publishing

I have just read the following on the problems of getting published. It was written in 1799 by the somewhat controversial politician and writer Capel Lofft in his preface to Robert Bloomfield's 'The Farmer's Boy' which was eventually published in 1800. (The emphasis in bold is mine.)

'In November last year (ie: November 1798) I receiv'd a MS which I was requested to read, and to give my opinion of it. It had before been shewn to some persons in London whose indifference towards it may probably be explain'd when it is consider'd that it came to their hands under no circumstances of adventitious recommendation.

'With some (publishers) a person must be rich, or titled, or fashionable as a literary name, or at least fashionable in some respect, good or bad, before any thing which he can offer will be thought worthy of notice.’

Robert Philip Bolton
I was born in Auckland, New Zealand, in 1945 which makes me much older than I ever thought I’d be. I began freelance writing in 1983 and have been a self-employed writer ever since. For the last few years have dedicated myself to my own writing, preferring to write and publish my own work which is mostly (but not only) about New Zealand and New Zealanders. I have published thirteen books which I sell in New Zealand from my website and around the world from Amazon (and Kindle) . Information on how to buy my books and e-books is provided on my website. I welcome comments and feedback and am happy to speak about my books to schools, book clubs and writing groups within a convenient reach of Auckland. I welcome email comments and feedback.